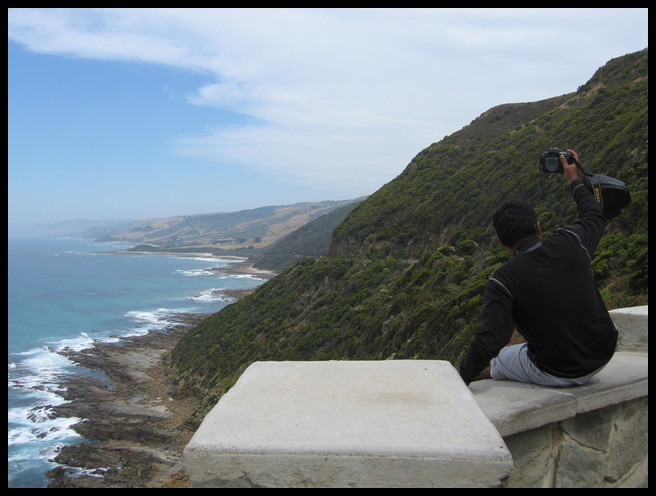 Last day of the year, last chance of a bike ride for the year. I think the same thing happened last year, a ride off along the Great Ocean Road. It started out with the idea of gently stretching the muscles from yesterday’s hike with a ride out to Wye River. Along the way I chatted to another cyclist heading to Wye and he decided that it wasn’t far enough and would continue to Kennett River. That seemed like a good idea to me so I did the same, then when I got to Kennett River the weather and road and traffic and state of mind all seemed conducive to just keep on going, so onwards to Cape Patton Lookout. Stopped at the lookout talking to a few tourists in their cars, all heading on to Apollo Bay or the Twelve Apostles, then I decided it really wasn’t that much further to Apollo Bay, a good spot for lunch before heading back….

Surprisingly, the traffic was fairly light and I didn’t have too many idiots to contend with, only a small number of arrogant 4WD owners too lazy or stupid to pull out as they passed, and three motorcyclists on unregistered dirt bikes overtaking head-on at me. The usual number of tour buses big and small, and plenty of traffic around Shrapnel Gully where a dozen cars had parked while people were photographing the koalas in the trees beside the road.

Similar mayhem in Apollo Bay to Lorne, hundreds of people milling around and bumper to bumper traffic, I grabbed a spot at a table and ordered my lunch. I’m not sure if they are normally this disorganised, or if its a special summer feature caused by too many new casual staff, but actually getting your orders seems to be a major undertaking. You have to order inside, quoting your table number, although nowhere on the menu, tables, or window, does it tell you this! The problem is, when the waitresses come out with the food and drink, none of them know which table it is for, so they just walk around and around asking each person “Cappuccino and a milkshake?” “Cappuccino and a milkshake…?” Sitting at the table nearest the door I was asked first each time and could have acquired half a dozen orders in five minutes!

Back on the road to ride home, I discovered that the gentle easterly that had made the ride out so pleasant had increased a little and was making the trip back more of a chore. The traffic had also increased, and between Apollo Bay and Cape Patton lookout I had to put up with far more than my share of idiots and boy-racers.