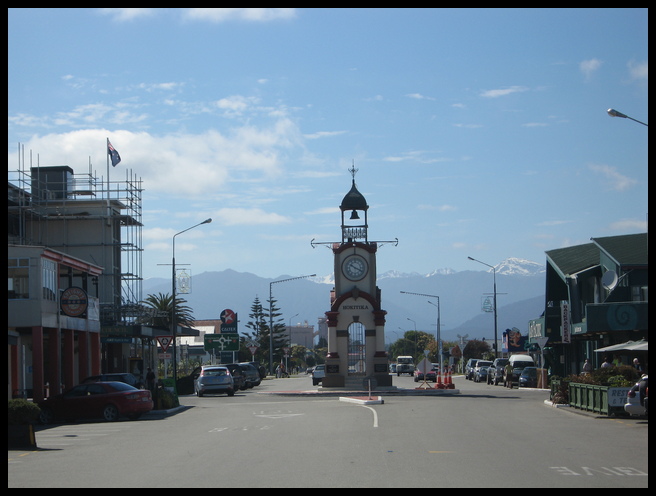 Trying for a smaller meal for once, we had a plain toasted sandwich for breakfast, then poked around in the greenstone shop while Hoki prepared for its Christmas parade. Nothing much of interest in the shops — nothing under a few thousand dollars that is! A little curious that from memory of my visit in 1980 it was all tikis and figurines, now it seems to be all spirals — “koru” — and other geometric shapes.

We drove out of town as the parade was starting, twisting around for 20km or so north then turning inland and commencing the climb up the valley towards Arthurs Pass. The road followed the old railway line on and off before losing it in the distance as we started the real 3rd and 2nd gear climbs and corners up through the forest. The views back down or out over the Otira viaduct were incredible — and just on cue two Kea mysteriously appeared without a sound. I’m not sure if they fly quietly in or walk out from under the bush, I’d suspect either. Very intelligent birds, they remind me as much of owls as they do of parrots.

Once over the pass the forest changes almost immediately, so much drier on the eastern side. We drove through the town of Arthurs Pass and out the other side before fully realising, then turned around to go back for lunch. So-so bacon sandwiches with more sickly-sweet salad dressing, but more than made up for it with a magnificent ice-cream, all eaten outside as the Keas circled overhead.

Coming down from the mountains and ski fields parts of the landscape were almost reminiscent of the Western USA, dry plains and rocky mountain sides, such a contrast from the green of the west coast forests.

Then a last hour or so across the plains of Canterbury, so green and tame compared to the mountains — and windy too! I can see why there are so many hedges and windbreaks planted.

Saturday afternoon Christchurch traffic came as a bit of a shock; traffic lights and a stop-start crawl. At the entry to the city the sign “Centre via One-way system” provoked a comment of “hold your breath, we’re going in” and much laughter. Amazing how your perceptions of traffic change after a few weeks of driving around out in the isolation in the country.

A car park in a random city street as we commenced the search for accommodation on foot. Strike one — Coachman is full. Strike two — Excelsior is full. Third time lucky, a bed in Corkers, although there is a long walk up the stairs and signs warn us to beware of leaving valuables about….

Then it is beer o’clock, first the delights of the “Twisted Hop” ale house, then beers and food at the “Dux de Lux.” With food and drink like this I could very quickly grow to like Christchurch!

Driver fails to give way or stop

Riding to work past my favourite school — the Greek Orthodox school — along Willesden street Murrumbeena, an aqua-green Ford Festiva – Victorian registration ###-### – was waiting at the Give-Way sign on my left, the driver didn’t look and drove straight out infront of me. I was travelling at around 30kph and had to swerve out almost into oncoming traffic to avoid running into the side of the car. Yelled loudly at her and she just looked puzzled as to why a cyclist was overtaking her... [cont.]