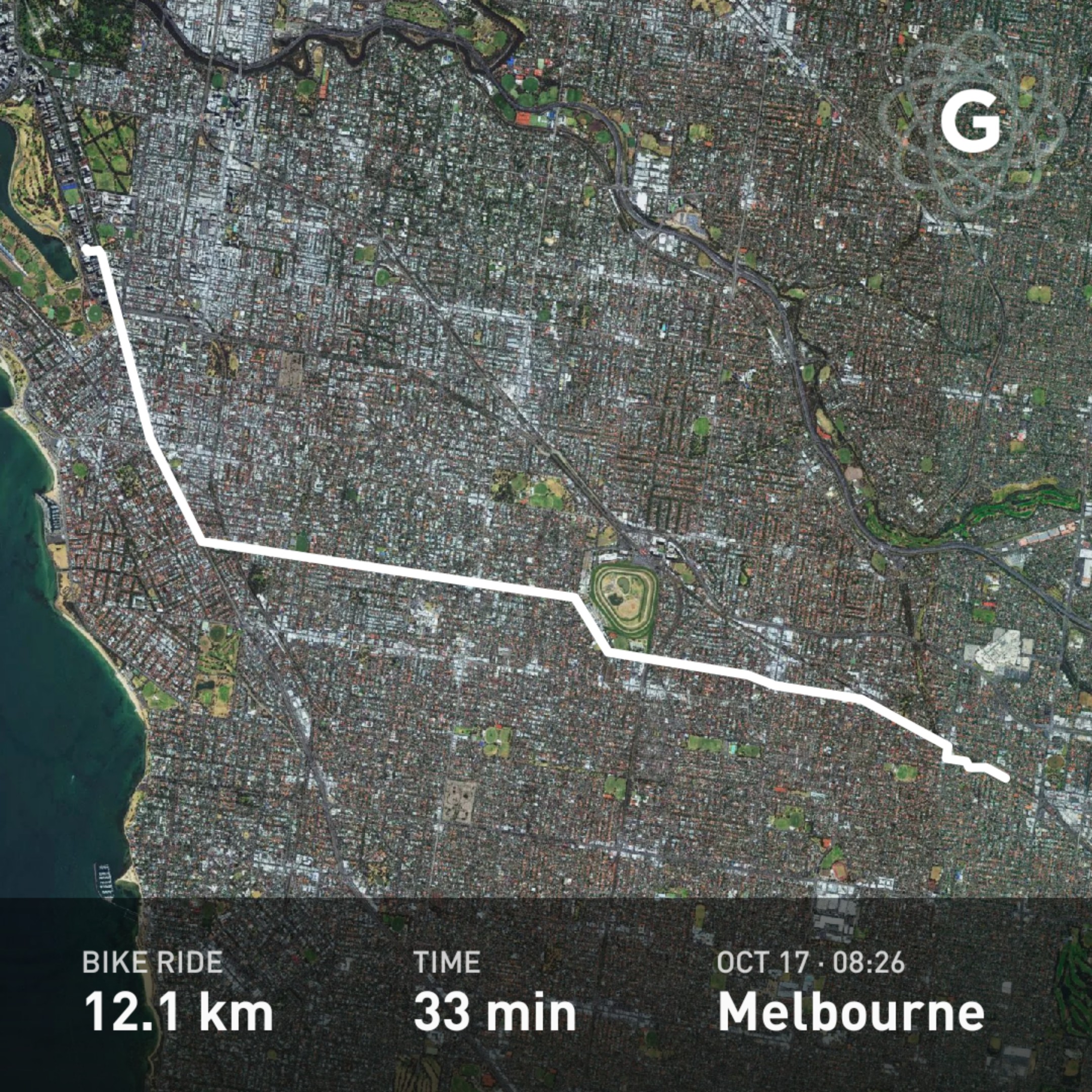 Today is the annual event of “Ride2Work day” that Bicycle Network organize to try and get people to try cycle commuting, even if only for the one day a year. Free breakfasts at various places, promotions, you name it. If I’d been going to work on campus I could have helped myself to either of two breakfasts depending on whether I came in the north or the south end of campus, instead it was the first day of the eResearch Australasia conference and I found myself heading towards the city. I suspect that if I’d known more accurately how long it would take me to ride there I could have called in at the Caulfield campus for a free feed.

A quick check of the map this morning to refresh my memory of how to get to the Pullman hotel – in the past I’ve always ridden to Caulfield then pretty much straight up Dandenong road. I was a bit surprised to see Google maps suggest Glen Eira road and Nepean highway as the preferred, and slightly shorter, option. I was also slightly dubious, since I’ve previously seen Google Maps suggest peak hour Warrigal road as an appropriate cycling route!

Straight west from Hughesdale, around the LXRA building sites and half-closed off park, through Murrumbeena and Carnegie, past the south side of Caulfield racecourse and around to the end of Glen Eira road. Turn left into Glen Eira and there’s a bike lane the entire length of the road for however many kilometres from here to the highway. It’s also full of perfectly legally parked cars and is completely unusable for the entirety of its length. Meaninglessly useless pretend cycling infrastructure.

Interesting shenanigans at each intersection, the bike lane vanishes, the road widens to two lanes each way, the motorists speed through the gap to get to the red lights then pull up blocking the “forward bike box”. Any cyclists have to stop behind because they can’t get to the bike box and can’t fit in the bike box if they can get there, then the lights go green and the first two cars in both lanes race each other to be the first one ahead as it narrows back to one lane and the bike lane reappears. Repeat as necessary for all the cross roads to the Nepean highway.

A right turn into the Nepean highway and there’s a real bike lane here, narrow, but alongside the parked cars rather than under them. Dangerously close alongside I’m reminded as a driver half opens his door then pulls it back in. Up and over the hill at St Kilda junction and into St Kilda road, here I meet some other cyclists for the first time – four or five at the lights – and are stuck with them for the few blocks up to the hotel/convention centre.

A left turn into the side street, then right into the car park across the stopped traffic and down into the underground car park. I got told off once years ago for coming down here, but every other day I’ve parked in there with no problems – the only problem being to find a pipe or fence to lock the bike to. As far as I can tell there’s no bike parking provided anywhere around the Pullman, at least down at the convention end.

Then back up inside, get changed, check in to the conference and help myself to a first cup of dubious conference coffee from the urns.