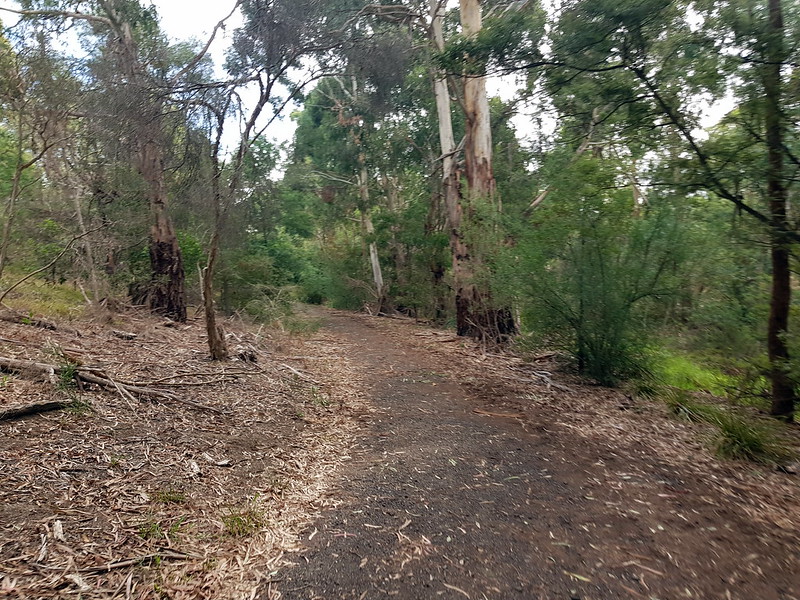 Last Sunday we rode along the gravel path on the south side of Scotchmans creek from Stanley avenue near the Huntingdale wetlands up to the freeway, today on the ride home I decided to take a mini-adventure, retrace the route in reverse and take a few photos as I went.

Turn left off Forster road and onto the gravel track, no council vehicles today, no snakes either, so both warning signs can probably be ignored.

Then along the track through the bush, ignore the distant roar of traffic on the freeway, squint your eyes a bit and you can pretend you’re miles from anywhere. There’s always people walking dogs along here, sometimes joggers, occasionally kids playing. Eventually the tracks end at the freeway, leading onto a ramp where maintenance vehicles can scoop rubbish out of the creek. Just across the other side is the official bike path and underpass, but there’s no way of getting to it, so the commonest approach is to ride or walk through the east-most tunnel. Apparently the centre one has much less silt and mud and is much easier going, providing you avoid the slippery algae-covered concrete where the water goes.

Slow going through the mud, at least I had my lights with me this time. I think I managed to get through with only having to put a foot down three times, and thankfully didn’t sink in much each time.

Up the other side and back into parkland, then roll along beside the creek until we meet the road and – you guessed it, there’s a car illegally parked blocking the end of the path. Squeeze past the car, wish for a council truck to turn up and simply push it out of the way, then back on the official bike path and ride the rest of the way home.

Mini-adventure complete. Must remember to wash the smelly mud off the bike.

Relive ‘Adventures on the longer commute’

Its either a sure sign of senility, or of hanging around with a two-year-old nephew for too long. Tonight we went off to the HiFi bar to see Mick Thomas and the Sure Thing play, supported by Gorgeous and the Drowners. During the Drowners’ set, Stewart (Stuart?) from the Sure Thing was standing near Jo and I watching them. The conversation between Jo and I was something along the lines of:.. [cont.]