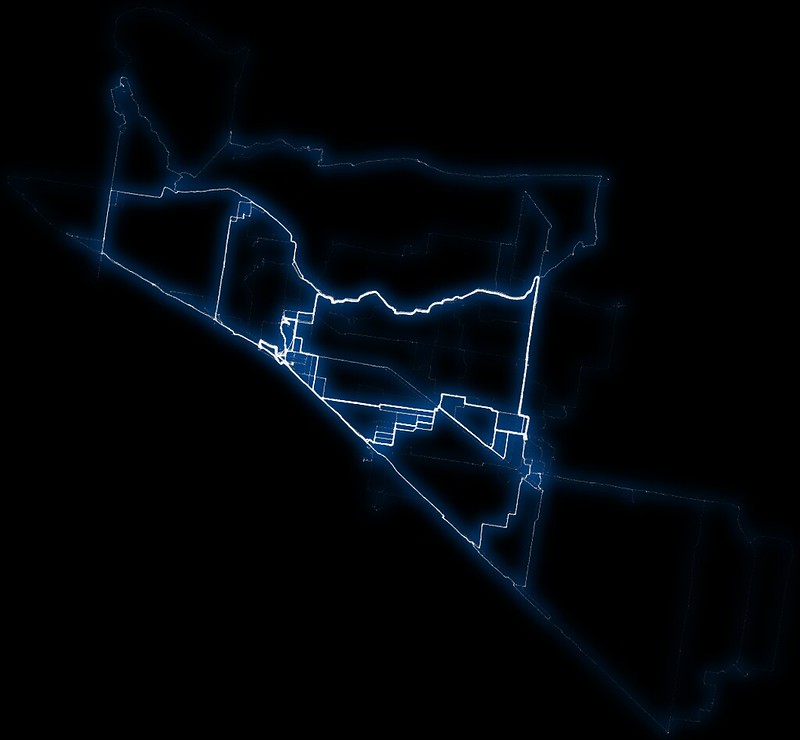 I think I rode to work every day this year, at least I can’t remember catching the bus. Shortest ride was around 2-3km when I had to drive to my parents in law’s house and ride from there. Longest was probably 30-40km on a Thursday or Friday afternoon when I can take a detour on the way home and go exploring.

From the visualisation of all the GPX tracks I saved its all variations on a theme and either straight out and back each day or an approximately anti-clockwise loop. Home is the brighter blob on the left about a third of the way in, that tangle is around Oakleigh shops where there are many routes. Work is Monash University, slightly lower and on the right. The most direct route in either direction is Edward street, Greville street and Dandenong road and is around 4.5km, although generally I ride down the Djerring trail to Huntingdale station and then zig-zag through the suburbs. My preferred route on the way home is north up Forster road then wind along the Gardiners Creek trail back to Oakleigh.

Coldest commute would have been down around -2°C once or twice in the winter, hottest and most memorable was my final commute of the year.

Last working day of the year was a scorcher, extreme fire danger and a predicted maximum temperature of 43°C. Most years people seem to gradually start drifting out of the office from around 2 pm onwards, this year very few showed up and those that did didn’t want to leave! The cool change wasn’t forecast to arrive until near midnight so there was no point staying around, at 4 pm I packed up and headed out into the furnace – called in at the pub for a cold IPA and a brief respite, then off along the bike track and home. The maximum I saw on the Garmin was 44.3°C with the heat reflected up off the roads in the last stretch to home.

My second ride of the eighth coffeeneuring challenge; a very different ride to a week ago and a lot fewer people about. I’d woken up around 4 am to the sound of heavy rain on the roof, not a good sign, but by the time I woke a second time at around 6:30 am the rain seemed to have stopped, although everything was very wet. I left under dull grey skies, temperature of 10... [cont.]